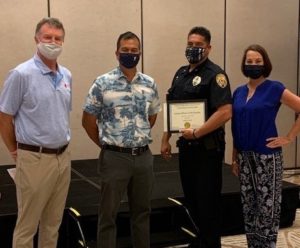 For his stellar investigation skills and attention to detail working crime scenes, Hawai‘i Police Department Officer Edward Lewis was recognized by the Hawai‘i Island Security and Safety Professionals Association (HISSPA) as HISSPA Officer of the Quarter for Q1 2021 on Friday, May 14 in South Kohala. An investigation into a burglary at a Waimea establishment in August 2019 is just one example of Officer Lewis’ dedication to duty. Responding to the theft, Officer Lewis determined the suspect(s) had removed screws from the metal siding on the building, punched a hole in the drywall to make entry into an electrical room, climbed onto plastic trash containers to get on top of the electrical box, punched through two drywalls and gained entry into the maintenance room, then climbed down a ladder into an empty room to access a safe. Officer Lewis meticulously documented the scene, noting items the suspect left behind, including dried blood on the damaged drywall. As part of his investigation, Officer Lewis had the blood’s DNA analyzed and conducted interviews, narrowing the suspects to a person of interest that used to work at the establishment. The suspect was subsequently arrested and charged for burglary in the second degree and criminal property damage in the third degree. Officer Lewis embodies the core values of the Hawai‘i Police Department: integrity, professionalism, compassion, teamwork, and community satisfaction. Through his efforts, the South Kohala district remains a safe place to visit, live, and conduct business.