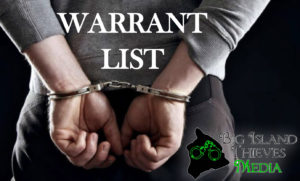 As of Friday January 21, 2022 the following individuals are wanted by the Hawaii Police Department because of outstanding warrants:

This is the official list from the Hawaii County Police Department

Police ask that anyone who knows the whereabouts of a person on this list call the Police Department’s non-emergency line at 935-3311. Tipsters who prefer to remain anonymous may call Crime Stoppers at 961-8300 and may be eligible for a reward of up to $1,000. Crime Stoppers is a volunteer program run by ordinary citizens who want to keep their community safe. Crime Stoppers doesn’t record calls or subscribe to caller ID. All Crime Stoppers information is kept confidential.

Persons who know a warrant is out for their arrest are advised to report to the nearest police station to avoid having an officer go to their home or workplace to arrest them.

Individuals can find out if they have a misdemeanor warrant or a traffic warrant by going to the Hawaii State Judiciary’s website at www.courts.state.hi.us. From there, click on “eCourt Kokua” and then follow the directions. Information about felony warrants is not yet available online.

Hawaii Police Department Response: “Originally, the list was for newspapers, which have limited space. The reason we do it in alphabetical order rather than chronological order is that sometimes we have a long list of new names and sometimes that list is short. This is a way we can be consistent with filling a specified amount of space for the newspapers. We realize that space isn’t a factor for a website, but to create a different version for you would require doing both versions. Unfortunately, we only have one employee who is responsible for all the police department’s court documents and she is the one who has to prepare the weekly list for the media. It would take away too much time from her primary duties if she had to do both lists.”

Puna Woman Charged with Possession and Attempted Distribution of Methamphetamine

24 motorists arrested for driving under the...