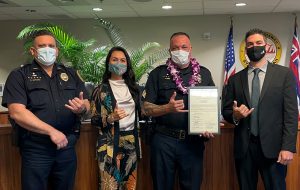 For his dedicated efforts organizing a prostitution sting organization that resulted in the arrest of 11 men and one woman last November, Hawai‘i Police Department Area I Vice Detective Jesse Kerr was honored by the Hawai‘i County Council during the Council’s meeting in Kona on Wednesday, January 19, 2021.

Kerr, a 23-year veteran of the department, meticulously planned the undercover investigation, which took place between November 16 through 18, 2021. Eleven men were arrested for soliciting prostitution and one woman was arrested for prostitution.

The certificate of honor was presented to Detective Kerr by Council Member Matt Kanealii-Kleinfelder on behalf of the County Council. The presentation coincides with January being National Human Trafficking Prevention and Awareness Month, which brings awareness to the issue of the exploitation of women.