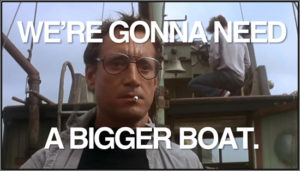 Just before 2 p.m., a father and son reported to the Maui Dispatch Center that they were kayaking in the 1000 Peaks area (Ukumehame), when a shark attacked their boat. They fell overboard when the kayak sank, and they were able to safely swim to shore. They reported the shark as a ten-foot tiger shark. Personnel from DAR and DOCARE officers are now attempting to get more information from the pair.

This incident is being handled under shark warning protocols, which means shark warning signs are up, one mile, on either side of the incident site. Beaches will be closed from the Pali Lookout to Lone Pines in Olowalu, until noon tomorrow.