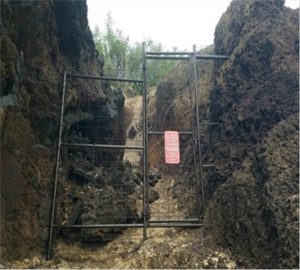 Authorities are searching for the person or people who cut through metal gate poles and fencing at the “entrance” to Pu‘u Ola‘i (Little Beach) at Makena State Park on Maui. The beach section was closed on Jan. 5 in an effort to stop Sunday evening large gatherings (drum circles) attended by hundreds of people.

One such gathering last fall was a so-called “super spreader” event for COVID-19, and the parties continued, nonetheless. The vandalism was discovered today and has been reported to the DLNR Division of Conservation and Resources Enforcement (DOCARE) for investigation.

DLNR Division of State Parks Administrator Curt Cottrell said, “This behavior is not only destruction of government property, but whomever did this misses several important points. First, the barrier was put up because many people were simply ignoring current COVID-19 mandates at their own risk. Secondly, this kind of senseless vandalism is an assault on everyone who pays taxes in Hawai‘i. These materials and the labor to install these barriers are not cheap and now we’ll have to spend limited staff resources on putting the gate up again.”

Vandals likely used power tools to cut through the steel support posts. They discarded signs, poles and fencing into the ocean. Today, State Parks workers were able to retrieve most everything and believe they can weld the fencing and gate back together. “Even so, it’s maddening, frustrating, and disappointing, that individuals who feel entitled to enter a closed area make it hard on everyone,” Cottrell added.

Select state parks have been closed as a last option to help stop the spread of coronavirus in big gatherings. Last fall Polihale State Park on Kaua‘i was closed for several months after an estimated 1,000 people gathered there over the Labor Day holiday weekend. It has since re-opened.

Managers are exploring options for re-opening Pu‘u Ola‘i, but Cottrell says today’s vandalism is certainly going to delay this. “We understand many folks on Maui want Little Beach reopened, but in good conscience we cannot do so as long as some people continue to misbehave, break the law, and endanger the health and safety of those around them. These actions reduce our confidence that once we do re-open we’ll see compliant and responsible behavior.”

Anyone who has information on this crime can report it anonymously to DOCARE by calling 643-DLNR or via the free DLNRTip app.

Couple Arrested and Charged for Kona Burglary and...