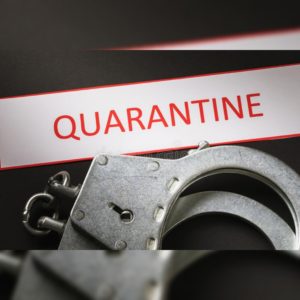 Oahu – A Gainesville, FL couple were arrested at a Waikīkī hotel this morning by Special Agents from the Investigations Division of the Department of the Attorney General. 43-year-old Andrew J. Edmonson and his wife, 34-year-old Gabriela Girao Edmondson are charged with violating the State’s mandatory quarantine rules. Agents say they both signed and acknowledged their Safe Travel form and understood they had to be quarantined for 10 days in their hotel.

When they checked into to their designated location of quarantine, the Royal Hawaiian Hotel, the hotel staff informed them that they would be issued a one-time entrance key and could not leave their room until their quarantine was over. They were angered and told them they were not prisoners and asked how they were supposed to eat. They left the hotel and management informed the Investigations Division. Special Agents developed information on the whereabouts of the two suspects. This morning a team of Special Agents was sent to locate them. The couple was located at another hotel and they were arrested for their quarantine violation.

Bail was set at $2,000 for each. They were booked and charged. Gabriela Girao Edmondson was identified as a Brazilian national and her embassy has been informed of her arrest.