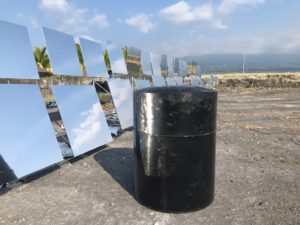 Hauled by crane, cargo ship, and giant forklift, an advanced solar ‘factory-in-a-box’ has arrived at NELHA on the Big Island of Hawaii.  Using heat from an array of 50 five-foot square sun tracking heliostats, the system uses up to 100,000 watts of solar thermal energy to heat molds and melt plastic to form high quality water tanks.

“We entirely replace the need for fossil fuels”, says Engineer Quinn Marsh, one of LightManufacturing’s engineers.  The company reports that in addition to significant fuel costs savings the firm eliminates greenhouse gas and particulate pollution common to other manufacturing methods.

LMI deployed its equipment in mid-October to a one-acre site at the HOST Park and had the solar-powered factory up and running by December, when the firm molded its first 290-gallon water tank using the power of the sun and without burning any fossil fuels. The company’s Solar Rotational Molding system uses an array of silent, sun-tracking mirrors called ‘heliostats’ to reflect more than 100,000 watts of free solar heat directly into the molding chambers. A national leader in solar power, Hawaii derives nearly 16 percent of its power from the sun, according to the Solar Energy Industries Association, and is a perfect environment for this breakthrough use of ‘raw’ solar energy for industry.

David Ige said, “Manufacturing is critical to diversifying our economy away from its dependence on tourism and enhancing the resiliency of our islands. NELHA shows that government can create the conditions for innovative businesses to work with Hawaii’s natural resources in a way that makes Hawaii better. LightManufacturing’s innovation with solar energy to manufacture needed goods without having to ship them here and ultimately reduce waste is an important step along this transition.”

He added that one of LMI’s long-term goals is to use plastic, such as what washes up on Hawaii beaches that community groups clean up regularly, that would otherwise find its way into landfills and mold it into useful products, thereby addressing another one of Hawai’i island’s challenges with waste. “We have some prototype solar-powered plastic recycling systems which show good promise,” says von Kries. With no fossil fuels required for power, the Solar Rotational Molding system is designed to make sustainable manufacturing a practical reality, especially once plastic can be sourced from a renewable resource.

“We are excited to host this new containerized technology project which is easily deployable on a small footprint. This will be LMI’s first facility based on the successful demonstration site in California. Its innovative use of solar heat through sunshine to manufacture important items locally addresses several ongoing Hawai’i Island waste and cost challenges.” said Gregory Barbour, Natural Energy Laboratory of Hawaii Authority executive director.

The company hopes to improve access to low-cost water tanks and related products on the Island, while continuing to develop it’s patented technology.   The company has created a dedicated website for its Hawaii operations, http://bigisland.lm.solar , which includes an online store where residents can buy tanks.