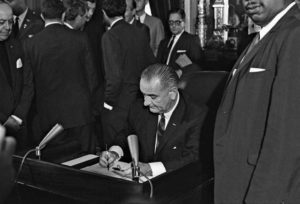 Voting Rights Act, U.S. legislation (August 6, 1965) that aimed to overcome legal barriers at the state and local levels that prevented African Americans from exercising their right to vote under the Fifteenth Amendment (1870) to the Constitution of the United States. The act significantly widened the franchise and is considered among the most far-reaching pieces of civil rights legislation in U.S. history.

Attorney General Clare E. Connors yesterday joined a coalition of 18 Attorneys General urging the Supreme Court to uphold a robust test for applying Section 2 of the Voting Rights Act (VRA)—which prohibits policies and practices that deny or abridge citizens’ right to vote based on their race. The amicus brief was filed in Brnovich v. Democratic National Committee and Arizona Republican Party v. Democratic National Committee, two consolidated cases concerning Arizona laws that challengers allege make it harder to vote. The coalition argues that the courts have developed a workable and searching inquiry into whether state laws actually operate to discriminate against voters of color and that the Supreme Court should maintain this standard instead of narrowing it or striking down critical voting rights legislation.

“The purpose of the Voting Rights Act is to protect the right to vote,” said Attorney General Connors. “The Ninth Circuit’s application of the law properly identifies and prohibits laws that deny people the ability to vote because of race.”

Section 2 of the Voting Rights Act prohibits any “qualification or prerequisite to voting” or “standard, practice, or procedure” that “results in a denial or abridgement of the right of any citizen of the United States to vote on account of race or color.” Since 1982, this has contained a discriminatory-results provision—allowing for election laws or structures to be challenged if they create unequal opportunities for participation in the political process.

Arizona has two laws that have been challenged because of discriminatory results: an “out-of-precinct policy,” under which provisional ballots cast in person are not counted if the voter, even inadvertently, cast the ballot outside their designated precinct; and a “ballot-collection” statute that prohibits so-called “ballot harvesting” and only allows certain individuals, such as family members, to collect and submit another person’s completed early ballot. The Ninth Circuit concluded that both laws produced a disparate impact on voters of color that created unequal opportunities for political participation, and thus both violated the VRA. The Arizona Attorney General and the Arizona Republican Party are challenging the Ninth Circuit’s ruling on statutory and constitutional grounds in the Supreme Court, joined by Republican state attorneys general. Those challenging the ruling argue that it works to effectively strike down all laws that impose even small differential effects on voters of different races.

The 18-Attorney General coalition supporting the ruling filed an amicus brief defending the existing test for assessing violations to t he VRA. Specifically, the states urge the Supreme Court to uphold the Ninth Circuit’s decision because:

•The existing test incorporates a rigorous analysis that only threatens election laws that actually operate to abridge or deny electoral opportunities: The Ninth Circuit’s test—similarly used by other courts—takes disparate impact as a starting point before engaging in a more searching inquiry into whether electoral systems actually function to exclude minority voters. Finding a mere disproportionate effect is not enough to strike down a law. Instead, the plaintiff must demonstrate that in light of the particular conditions in the jurisdiction at issue, the disparate burden actually denies voters of color equal opportunities to participate in the electoral process. This rigorous analysis provides an administrable framework that gives States flexibility while preventing discrimination.

A copy of the amicus brief can be found here.

Attorney General Clare E. Connor releases statement. Guess about what and who?