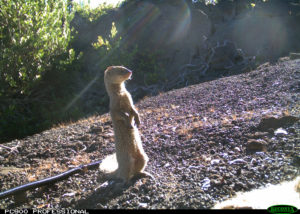 It’s an event designed to raise awareness of these impacts while also recognizing the work being done to protect against them. Itis hosted by the  Department of Agriculture (DOA) and the Department of Land and Natural Resources (DLNR), with both agencies serving as co-leads of the Hawaiʻi Invasive Species Council (HISC).

Due to the impacts of COVID-19, the month’s activities are going virtual this year, with most events being livestreamed or shared via social media. The month will kick-off with an opening ceremony hosted by the Hawaiʻi environmental stewardship training program Hālau ʻŌhiʻa on Facebook Live. About 30 educational webinars are scheduled throughout the month. Each week features talks from a different island.

The HISC support program will also be announcing awards to recognize individuals, projects, or businesses whose efforts have helped reduce invasive species impacts in their communities. Videos announcing these awards will be featured on social media, as will interactive activities such as a Hawaiʻi island tournament to vote for the island’s “worst” invasive pest. Social media content is searchable by the hashtag #HISAM2021.

“It’s a really fundamental problem in Hawaiʻi,” said DOA chairperson Phyllis Shimabukuro-Geiser. “Whether you’re growing food and ornamental plants for yourself, your community, or for export, invasive species can impact every aspect of agriculture. Invasive pests like coffee leaf rust or coffee berry borer can change the amount you’re able to produce or the quality of your products. A farm or residence that has a species like little fire ant could even see impacts on the health and safety of agricultural workers as well as families.”

Farmers are not the only group feeling the sting of invasive species. “This is an issue that highlights how people are part of the environment, not separate from it,” said Suzanne Case, DLNR Chair. “One of the major impacts we see from invasive species is the reduced production of fresh water from native forests. That’s a problem that impacts nearly every living thing on land, whether it’s a native bird, a pet dog, ourselves, or our loved ones.”

The HISC and its partners have coordinated an annual recognition of invasive species impacts each year since 2013. The event was originally designed as Hawaiʻi Invasive Species Awareness Week, around the same time as the U.S. National Invasive Species Awareness Week. However, partners quickly found that there was so much to talk about, and so many people and projects to celebrate, that in 2018 the event was expanded to last an entire month.

A full schedule of events with links to webinars is also available online at dlnr.hawaii.gov/hisc/2021hisam/.

Snake Turned in at Honolulu Zoo Under Amnesty