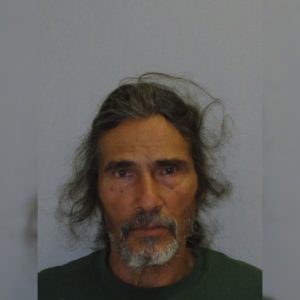 Hawai‘i Island police have arrested 61-year-old Alfred Cababag of Hawaii Ocean View Estates as a result of an animal cruelty investigation that was initiated after receiving calls from the public about possible animal neglect in Ocean View.

In December 2020, detectives from the Hawai‘i Police Department’s Area II Criminal Investigations Section started an animal cruelty investigation after receiving a report of numerous dogs on Cababag’s property on Lureline Lane. Working with members of the Hawaii Rainbow Rangers, detectives and officers and determined that an estimated 50 dogs were on the property. Further investigations revealed that several of the dogs were severely undernourished and were not adequately cared for.

On Tuesday, February 2, 2021, while executing a search warrant at Cababag’s property, 53 dogs were observed to be on the property. Members of the Hawaii Rainbow Rangers conducted a field assessment and determined that 46 of the dogs were either undernourished, and/or injured and were need of additional care. The dogs were transported by the Hawaii Rainbow Rangers to an animal shelter in Kamuela, Hawaii where a veterinarian will conduct a thorough examination of each dog.

Cababag, who was at the property at the time, was arrested for suspicion of felony cruelty to animals in the second degree and released pending further investigation. Cruelty to animals in the second degree is a felonious offense if it involves more than 10 pet animals being neglected or abused. The investigation will be forwarded to the Prosecutor’s Office after a complete evaluation of the animals has been completed.

The Hawaii Police Department encourages the public to report any suspicion of animal neglect or abuse by calling the police department’s non-emergency number at (808) 935-3311.

So if they’re cruel & abusive to 9 animals,
it’s not felonious?!? Wow.