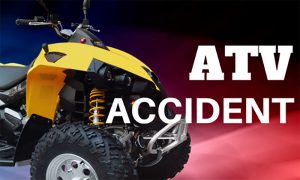 The 37-year-old male has been positively identified as Jason Oliveira Kanakamaikai.

Responding to a 9:00 a.m. call, police determined that a green 2002 Honda Rancher ATV was heading northeast on Coconut Drive and failed to stop at the intersection of Plumeria lane and sideswiped a green 2000 Dodge van that was heading south.  The rider was then ejected off of the ATV.  The 37-year-old male was transported to the Kona Community Hospital for his initial treatment and then was later transported to the Queens Medical Center on Oahu.  He is currently listed in critical condition.

Police do believe that speed and impairment are possible factors in the collision.

The Area II Traffic Enforcement Unit has initiated a Major Traffic investigation and is asking for anyone who may have witnessed the accident to contact Officer Jason Foxworthy at (808) 326-4646, ext. 229 or email at Jason.foxworthy@hawaiicounty.gov.