Puna Man charged with Theft of Tundra, Honda CR-V and Fleeing from Police 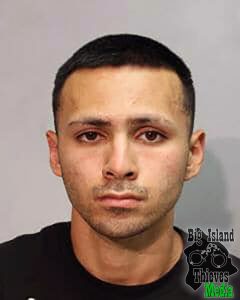 Prosecuting Attorney Kelden Waltjen announced that a Puna man, 19 year-old Nathanuel Chow-Guzman was charged in relation to the theft of a Toyota Tundra, that was originally reported stolen from a Hawaiian Paradise Park residence on October 18th, the theft of a Honda CR-V, that was originally reported stolen from a Hawaiian Paradise Park residence on January 5th, and fleeing from police on January 10th.
As the Complaints allege, Chow-Guzman, who has no prior criminal convictions, was charged with five (5) offenses including two counts of Theft in the Second Degree (theft of property valued over $750, a Toyota Tundra and a Honda CR-V), two counts of Unauthorized Control of a Propelled Vehicle in the First Degree (unauthorized control and/or changing the identity of a Toyota Tundra and a Honda CR-V without the owners’ consent), and Resisting an Order to Stop Motor Vehicle in the First Degree (fail to stop motor vehicle while fleeing from police and operate a motor vehicle in reckless disregard of the safety of others). At the time of his arrest, Chow-Guzman was also wanted for an outstanding $25,000.00 Circuit Court Information Charging warrant for another unrelated felony matter, where he was previously granted supervised release over Prosecutor’s objections in District Court this past October.
On Tuesday, Chow-Guzman made his initial appearance in Hilo District Court on the new felony charges and for hearing on return of the Information warrant of arrest in Circuit Court. The District Court maintained Chow-Guzman’s bail at $50,000.00 in total and ordered him to appear for his preliminary hearings on January 20th. The Circuit Court also maintained Chow-Guzman’s bail at $25,000.00 and ordered him to appear for Arraignment and Plea on January 20th.
The cases were initiated by South Hilo Patrol and Puna Patrol and the felony investigation and arrest was coordinated by Officers Christopher Fukumoto, Michael Sailer, and Sheldon Adviento and Detectives Keith Simeona and John Balberde, Special Enforcement Unit, Area I Criminal Investigation Section, Hawai‘i Police Department. The case is being prosecuted by Deputy Prosecuting Attorney Kevin Soong.
The charges are merely allegations, and the Defendant is presumed innocent unless and until proven guilty.
The Office of the Prosecuting Attorney remains dedicated to the pursuit of justice with integrity and commitment. Anyone having information to assist local law enforcement should call Crime Stoppers at (808) 961-8300.
#hawaiiprosecutors