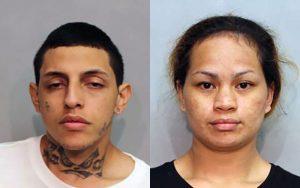 At 10:20 a.m. on Friday, January 21, 2022 two Puna patrol officers were conducting traffic enforcement on Orchidland Drive when they spotted an unoccupied vehicle parked in the gas pump area at a convenience store with a gas station. The vehicle, a Honda sedan, was spray painted black, had a broken windshield, no front license plate, and had an expired safety check and weight tax.

Suspecting that the vehicle might possibly be stolen, the two officers investigated further, with one parking in front of the unattended vehicle and a second officer parked to the rear of the suspect’s vehicle next to a gas pump.

As officers were inspecting the vehicle, a male suspect later identified as 23-year-old Kade Kapika-Overturf, ran out of the convenience store and jumped into the vehicle, attempting to flee the scene. The suspect was moving the vehicle forward and backwards while revving his engine. When officers gave Kapika-Overturf verbal commands to stop the vehicle, he stopped for a brief moment then proceeded to accelerate the vehicle striking the front passenger quarter-panel of the police subsidized vehicle in front of him. In an effort to de-escalate the situation and not use lethal force, the officer at the front of the vehicle used his baton to break the front passenger window.

A second officer standing on the driver’s side of the vehicle was able to open the rear driver side door in an attempt to stop the suspect. Kapika-Overturf then reversed and hit the second officer with the open rear driver side door, throwing the officer backwards. The suspect continued driving in reverse, striking the front end of a second police subsidized vehicle before coming to a final stop.

Recovering quickly from being struck, the second officer made entry into the vehicle where he discovered a woman, later identified as 26-year-old Shayla Kamahele, hiding in the back passenger seat. The first officer, continuing to show restraint by using non-lethal force, discharged his Conducted Energy Weapon (CEW) at Kapika-Overturf in an attempt to affect an arrest. However, Kamahele ripped the CEW wires forcing the officer to deploy his CEW for a second time. Kapika-Overturf and Kamahele were removed from the vehicle and placed under arrest.

Neither officer was injured during this incident.

Kapika-Overturf was arrested and charged for a probation revocation warrant, and arrested on two counts of criminal property damage in the second degree.

As part of the ongoing investigation, investigators recovered 8.5 grams of a substance that tested presumptive for methamphetamine for which charges are still pending. Investigators later learned that the VIN plates from the vehicle have been removed. At this time, officers are unable to determine if the vehicle has been reported stolen.

Kamahele was arrested and charged for contempt of court warrant and arrested for hindering prosecution in the second degree for breaking the CEW wires and actively interfering with the arrest.

Motorists Reminded to Move Over During Crash...