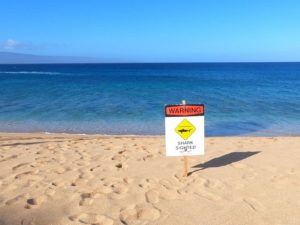 (Kaanapali, Maui) – A 73-year-old man from California, snorkeling off Airport Beach in front of the Maui Westin at Kaanapali, was bitten by a shark this morning. Fortunately, he suffered  only minor lacerations in the encounter, which happened at about 7:20 a.m. There were no other snorkelers or swimmers in the immediate vicinity and the man swam back to shore on his own and called 9-1-1.

First responders, ocean safety, and conservation law enforcement officials are always pleased when someone walks away from a shark encounter with only minor injuries. Today’s incident provided a close-up look at the standard shark incident protocols employed by the DLNR Divisions of Aquatic Resources (DAR), the Division of Conservation and Resources Enforcement (DOCARE), and county partners.

DAR and DOCARE are not typically first responders, but once on the scene, they coordinate closely with county emergency medical services and ocean safety personnel. Today, like in many previous incidents, DAR Education Specialist Adam Wong arrived with shark warning signs to post on the beach. He then headed to the hospital. Wong is one of several DLNR staff trained to interview shark bite victims, when possible, to gather more information and to provide critical details to state and international databases on shark incidents worldwide.

DOCARE officers also arrive with signs, some of which are loaded onto an ATV to be put up along a stretch of beach, one mile on either side of the incident site. The signs themselves become photographic memories for visitors.

Until sundown, a half-dozen DOCARE officers will continue patrolling the beach on-front and by all-terrain vehicle to warn people not to go swimming, snorkeling, or diving. County lifeguards also warn people.

DOCARE Lt. Cahill explained long-in-place, shark-human encounter, safety protocols. For today’s incident he said, “Shark warning signs have been posted from Pu’Keka’a (Black Rock Beach) to Honokowai Beach Park warning people to stay out of the ocean until an all-clear is given.  “Warning signs always remain in place until noon of the day following all shark incidents, after officers and lifeguards have assessed the ocean to be sure there is not any shark presence.

Several hours after the incident, at Black Rock, on the southern perimeter of the warning area, DOCARE Officer Cory Fernandez spotted two spear fishers in the water. Over the pounding surf, he hailed them, got their attention and directed them to swim to a nearby pier. He informed them about the shark warning and asked them to get out of the water. It was not a total lost day for them, as they caught one tako and a couple of fish.

DOCARE Chief Jason Redulla and DAR Administrator Brian Neilson point out that DLNR’s shark incident response procedures are designed to provide a high degree of awareness to beachgoers after an incident, with a total focus on public safety.

Class of 2021 Graduation Celebration Scheduled for...